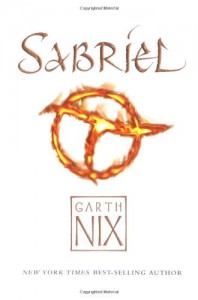 I went into this book knowing pretty much nothing at all about it. It was recommended by a good friend who generally has good (i.e., similar to mine :D) tastes, so I felt good about picking it up! Funny enough, outside of Lord of the Rings, it's the oldest fantasy I've read. Which, I know I know, is hilarious, because it's only 20 years old. Haha. Fantasy isn't typically my gig, okay? Though lately I'm enjoying it more and more. Anyway!

My favorite part of this novel was the collision of old world and new - the archaic, medieval world "across the Wall," and the more modern, WWII type world on the other side. The world (or worlds, I guess, even though they are definitely interconnected) is very layered and complex. Color me intrigued. Intrigued enough to keep reading, even when I felt the characters were kind of flat. Sabriel, god love her, was just...eh. Touchstone was slightly more interesting but also...eh. Mogget was definitely the most interesting character of the entire book. I...well, I'm not sure what I feel about Mogget! I want to love Mogget, but I'm kind of afraid to because...what is Mogget? As it is, the chain of events, piling sinister and weird on top of each other, was enough to keep me reading. Characters are, honestly, the biggest draw of a book for me. To not be totally in love with these was kind of a downer. They're sympathetic, don't get me wrong! Just kind of two-dimensional. Also, the romance? Better left out entirely than the way it was just thrown on top like too-stiff frosting. It could have been written so much better. That's really the only complaint I had about the writing though. The world descriptions were fabulous. I could see the gown Sabriel wore, could hear the winds behind the Paperwing and see its yellow eyes. I'll definitely be continuing with the series.
Tweet