The Bear and the Nightingale: A Novel 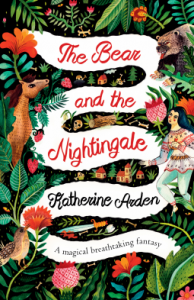 ~*Full review and comments on The Bent Bookworm!*~

There was a time, not long ago
When flowers grew all year
When days were long
And nights star-strewn
And men lived free from fear

Just to clarify: The Bear and the Nightingale (TBATN) is NOT a YA book. I’ve seen it pop up on several lists as such, but it is not. It’s also NOT historical fiction, though it is heavily inspired by historical, medieval Russia. It is adult fantasy that reads almost entirely like historical fiction until Part II, where it starts to feel like magical realism historical fiction…so let’s just keep it simple and say fantasy. Could some teenagers read it and appreciate it? Yes, but the style is very different from most YA, and some of the content is definitely adult (marital rape and a little graphic violence). This obviously didn’t deter me from ADORING it, but I thought the slight genre-confusion I’ve been noticing was worth a mention.

In Russian, Frost was called Morocco, the demon of winter. But long ago, the people called him Karachun, the death-god. Under that name, he was king of black midwinter who came for bad children and froze them in the night.

I am in love. With everything. With the world, with the characters, with the woods, the village. With Vasya. A little bit with Alyosha. I wept with Vasya and her family. I saw the spirits as Vasya did. I felt the fear of the villagers. I felt the pain and confusion of a young child with a wild, free spirit in a world that didn’t accept her. The writing in TBATN is astounding. Lyrical, whimsical, and utterly entrancing.

“I am only a country girl,” said Vasya. “I have never seen Tsargrad, or angels, or heard the voice of God. But I think you should be careful, Batyushka, that God does not speak in the voice of your own wishing. We have never needed saving before.”

Vasya, the main character, is my sister from another mother. I swear. Her love of nature, her stubborn refusal to accept the fate others wish to push on her, her refusal to be broken. I already said I love her but it bears repeating. The story spans from right before her birth to the time she is 14 years old. She doesn’t have an easy life, but she has to be one of the most resilient people I’ve ever met. Bent, at times, but never broken.

“All my life I am told how I will live, and I am told how I must die. I must be a man’s servant and a mare for his pleasure, or I must hide myself behind walls and surrender my flesh to a cold, silent god. I would walk into the jaws of hell itself, if it were a path of my own choosing.”

Now no joke, there are quite a few characters in this story. However, they are all so clear and distinct I was never confused. Not once. Not even with the Russian names. I did have to realize in the beginning that everyone had a given (fancy) name and a called (shorter, plainer) name, but since Arden stuck mostly to the called names it wasn’t hard. Also, each character experiences a growth arc in the book. No matter how minor, they show some growth and change – sometimes for good, sometimes for bad! That is an incredible feat and after reading so many books with such flat minor characters – amazing.

Romance – guess what? There is none. None. None, none, none, NONE! It’s such a beautiful breath of fresh air. There IS marriage. There’s also sex – and by sex I mean marital rape. It’s not graphic, but it’s obvious. I feel it’s treated as well as such a thing CAN be – these are medieval times, and in those times women were no more than property, no matter how highly valued that property. The women themselves often never questioned the right of their fathers and husbands to barter with them and then use their bodies for their own pleasure – it was a husband’s right and a wife’s duty! *insert much sarcasm* It definitely effects the entire dynamic of the story.

TBATN is not a fast-paced book. It’s a slow burn building up to more and more – and it’s TOTALLY worth the read. All the details are beautiful and intriguing, and they really add to the mystery and overall atmosphere. The characters are really the driving force, and all the drama and suspense are very slow to build but after spending several chapters getting to know the people and the country I was already so invested I already knew I was in for the haul. Things really start to pick up with the arrival of a new priest in Vasya’s village. There is a struggle between the new Catholic church and the old spirits of the land and as things start to happen at first NOTHING is explained. Everything just kept building and building and there’s even a little mini-climax at one point (which was EXTREMELY satisfying), but things just keep going! Not only did it keep going, it picked up speed and I was completely wrapped up in the story.

As previously stated, there is no actual romance in TBATN. It doesn’t need it. There’s also not an entirely happy ending. It is…heartrending, yet hopeful at the same time. There’s no actual cliffhanger, but so much room for additional stories, and Vasya’s fate and path seem far from decided.

Phenomenal. It truly has a historical feel to it. I’m not all that well-versed in Russian history or mythology, but the detailed notes on language and history at the end, as well as the comments I’ve read from people native to that part of the world seem to bear out that thought as well. The descriptions allow you to fall through the pages into the story, and it really feels like a full sensory experience. When the mythological creatures begin to appear, it feels so amazingly right.

5 stars. I don’t have any more words for how beautifully savage this book is. I can’t wait to see what Katherine Arden comes up with next. I’ve heard rumors this is the first of a trilogy, but in her author Q&A page I only see mention of a sequel. I’ll be buying whatever she comes up with!

Thank you to NetGalley and the publisher for sending me an eARC in exchange for an honest review!