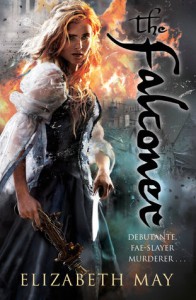 Such a seemingly innocuous comment haunts Aileana Kameron both waking and sleeping, because it was spoken to her by the faery that killed her mother. Traumatized and hungry for revenge, she takes comfort only in hunting, killing, and devising weapons against the faeries loose in the world. Of which there seem to be more and more...

First of all, can we talk about the cover? I am absolutely in love with this cover. I want her hair. And I'm going to steal her lovely little dagger to double as a letter opener. The cover set my expectations for this book extremely high.

Expectations that were...kind of sort of met? First of all, the setting. Edinburgh. I kind of have a love affair with Scotland. Or at least the idea of Scotland that's in my mind, since I've never actually been there (sadly). I think Elizabeth May loves Scotland too, because her descriptions of Edinburgh make it sound lovely - even with the bloodthirsty faeries thrown in. Also, Aileana has this amazing, ship cabin imitation room with hidden compartments and a pixie in residence. I am supremely jealous.

Aileana herself...I kind of want to smack over the head with a 2x4. While at the same time I want to go hunt faeries with her. Every time I thought I was going to get to really like her, she would say or do something else that left me like:

And she was so, so full of herself. Confidence? She has it in spades. In fucking spades. Arrogance. Bravado. Foolhardiness. Also tendencies to the dramatic. See above face.

This is who I am: a night creature who thrives on death and destruction.

Oh, really? Even though your buddy Kiaran (more on him in a minute) has to save your ass every time we turn around? I guess it could be argued that throwing herself in death's way constantly is her way of dealing with her mother's death. But she is just so annoyingly full of herself.

I don't yield. I don't retreat from him or let him intimidate me.

Aileana. Word of advice, darling. Let someone else sing your praises, for once. No one is having a pissing contest with you. Anyway, even aside from all that - I like Aileana, for her sheer stubbornness. Also she vacillates between wanting to be a BAMF and what her 19th century high-class society expects of her. For example, at one point she's wounded rather badly and holed up in her bedroom, bleeding and fevered. Kiaran manages to make it to her with medicine and stitches - and she is so freaking worried about him being in her room and the impropriety of him sitting on her bed while he stitches her up.

Of course she gets all hot and bothered about it, despite Kiaran being a walking big red flag. Oh yeah. Getting to him in a sec, I promise...

Sidetone: have I mentioned how much I hate love triangles? I. Despise. Love triangles. So overused, so stupid, so dramatic. Drama llama go home to mama. Bye. I didn't think this book had one, until I got almost to the end and I had a "Wait, what?!?" moment. Aileana, of course, can't be happy with the sweet guy next door, Gavin, - who also happens to be one of, oh, two people who understand and support her obsession with killing faeries - and instead can only see him as a friend. Sigh. To the author's credit, neither one is actually taken with the other, so this isn't a true love triangle, I guess. I just felt like the suggestion was there and expected. Or maybe I'm just pouting because this was yet another moment in time where Aileana's face needed to meet a 2x4. Because bad boys - especially when they are, in fact, faeries - are really not good for you.

Especially not when they are Kiaran. Kiaran, a fae himself who hunts his own kind for reasons unknown and still not entirely revealed by the end of the book (at least not to my satisfaction). Kiaran, a complete badass with a heart of ice and who always believes the end justifies the means. Kiaran, with more secrets than Aileana could ever dream, even though she likes to compare herself with him.

I'm beginning to realize how much our secrets define us. A few days ago, he and I would have hunted together and returned to our respective lives, the same as always. Now our boundaries are fading, and we grasp those last few secrets we still do have, because baring one's soul is so much more difficult than pretending.

Aileana, darling...you DO realize you're only 18, right? And until a year ago you were a pampered, sheltered little society girl? There are only so many secrets you can cram into a year. But of course secrets make Kiaran so much more appealing.

He is a compelling character. Especially the closer the end comes and a teensy tiny crack or two appears in his stony faery heart and we learn a little more about his past and what compels him. He still seems like a completely self-serving ass though. I say seems, because I have a hope that he will change. I highly doubt he will ever lose the habit of pointing out the uncomfortable feelings Aileana tries to ignore.

"In the end, they couldn't avoid their true nature any more than you'd be able to. Unless I'm wrong. When you imagine yourself years from now, is it the Seer you're with? Or is it you and me, planning our next slaughter?"

Oh, he also manages to be the comic relief at times, as he has no concept of Victorian propriety and even when he does manage to remember manners...really just doesn't care.

The storyline moves along at a good clip. Aileana, Kiaran and company have to try to save the world from the impending fae attack, each compelled by different motives. The hot and bothered-ness Aileana feels for Kiaran increase. They are inches from saving the world. And then...then shit happens. And...CLIFFHANGER. I was literally left with my jaw hanging open. I went back and read the last chapter, thinking surely I missed something. But no. NO.

Overall I gave this 3.5/5 stars. Due to my near-constant annoyance with Aileana, I couldn't pull it up to 4. Despite that, I'm really looking forward to the sequel and (again) have very high hopes for it!

Also, I kind of feel like this should be a mid grade novel as opposed to a YA. As in appropriate for about 12 and up. I probably would have read it at about 8 and loved it. It just feels very tame, and while there is definite attraction (and a few British-type swears) between the characters, the descriptions are not even close to R-rated. Or maybe I would just be a horrible parent, haha.